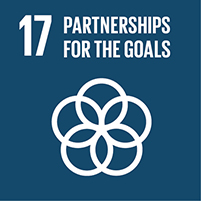 Partnerships for the goals

Strengthen the means of implementation and revitalize the global partnership for sustainable development.

CERN’s mission extends beyond science: it also aims to bring people together. CERN has become a model for global cooperation and opened the way for other institutions that combine scientific excellence with science diplomacy.

CERN brings nations together through science, and organises and sponsors international cooperation in research, promoting contacts between scientists and interchange with other laboratories and institutes. CERN is run by 22 member states and 6 associate member states, and its success is in large part due to its rich international collaboration. Thanks to a structured network of relations with other International Organisations, CERN consolidates the importance of scientific education, technology, and innovation as a driving force in the economy and society.

CERN scientific excellence attracts about 70% of the world’s particle physics community. Based on this spirit of open access, collaboration, tolerance and freedom of thought, the CERN model serves as a ‘blueprint’ for open global collaboration and evokes calls for similar multinational research effort in other fields. A bright example is the SESAME project in Jordan, creating a CERN-like research facility in the Middle-East. SESAME is a unique joint venture that brings together scientists from its members: Bahrain, Cyprus, Egypt, Iran, Israel, Jordan, Pakistan, the Palestinian Authority and Turkey.

CERN cooperates and has agreements with 8 UN organisations: UNESCO, UNOSAT, UNITAR, ITU, WIPO, WMO, WHO, UNOG, and also IPU. It is also an observer to UN General Assembly.

"People from all over the world come here, bringing with them different cultures and different ways of working. This diversity is part of our strength, and it’s something that we need to nurture constantly."
- Fabiola Gianotti, CERN Director-General