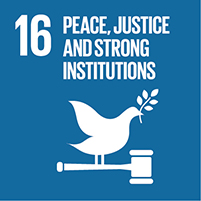 Promote just, peaceful and inclusive societies for sustainable development, provide access to justice for all and build effective, accountable and inclusive institutions at all levels.

Since more than 60 years, CERN is building peace through science. CERN is a centre of scientific excellence and provides a framework for peaceful scientific collaboration. 16 000 scientists from more than 110 nationalities work at CERN together in peace, irrespective of their religions or government systems, some from countries that are opponents at the political stage.

According to CERN Convention, all CERN’s results and discoveries have to be put open and free of access for everybody. Transparency and open access to information are among the core values of CERN, and the Laboratory is accessible for every organisation willing to use its infrastructure and sharing these principles. For example, in cooperation with UN, CERN provides the IT infrastructure that allows the UNOSAT programme to be at the forefront of satellite-analysis technology, e.g. for disaster-risk reduction or regional capacity development. Moreover, CERN helped to build the SESAME light source in Jordan, which follows the CERN model and promotes scientific collaboration in the Middle East.

CERN is an effective, accountable and transparent institution, ensuring a participatory and representative decision-making, as well as public access to information.

"CERN’s commitments to carry out purely fundamental research and to make all of its work public have ensured peaceful collaboration between scientists from all countries."
- Rolf Heuer